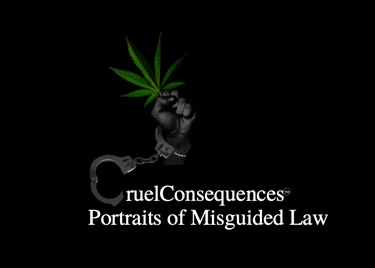 Stop the Human Cost and Lifetime Consequences of Marijuana Prohibition.

Dispensaries: Order an exhibit today! Show your customers your dispensary has Social Responsibility 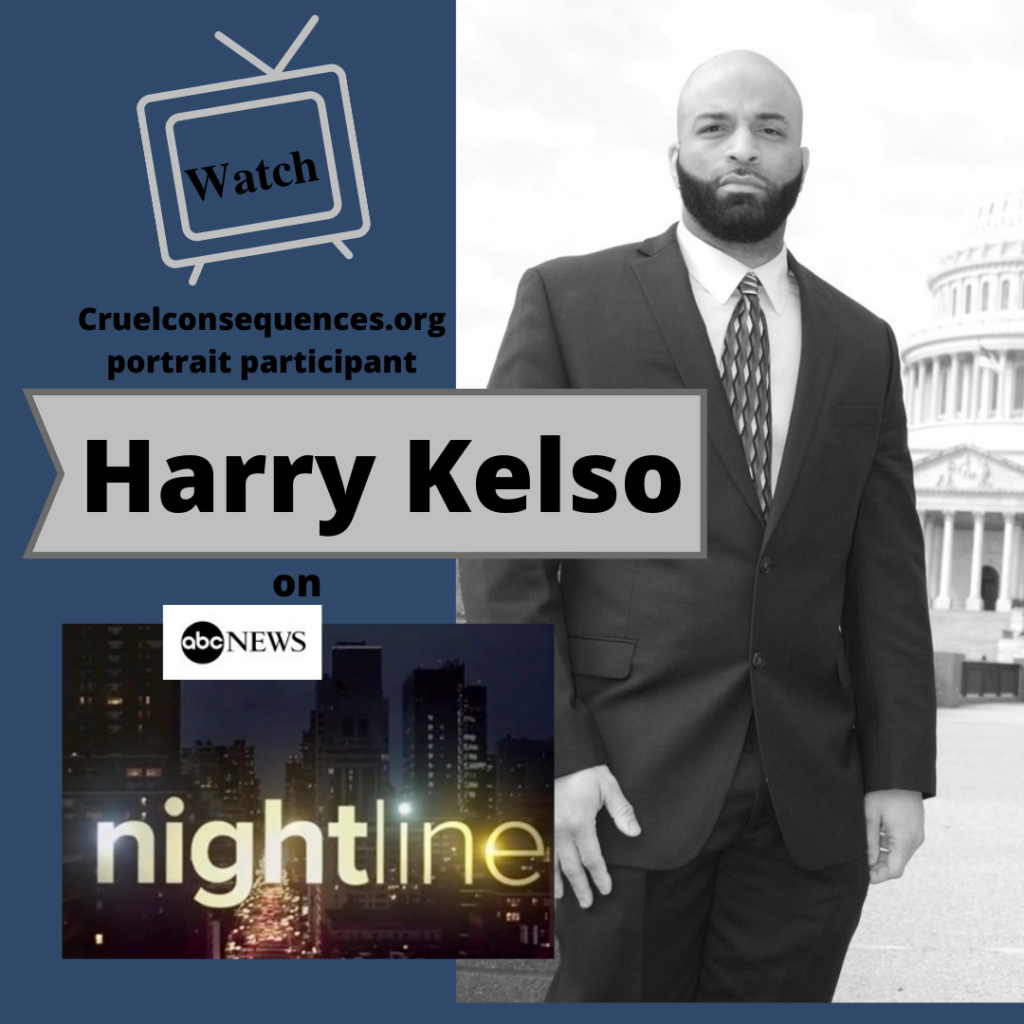 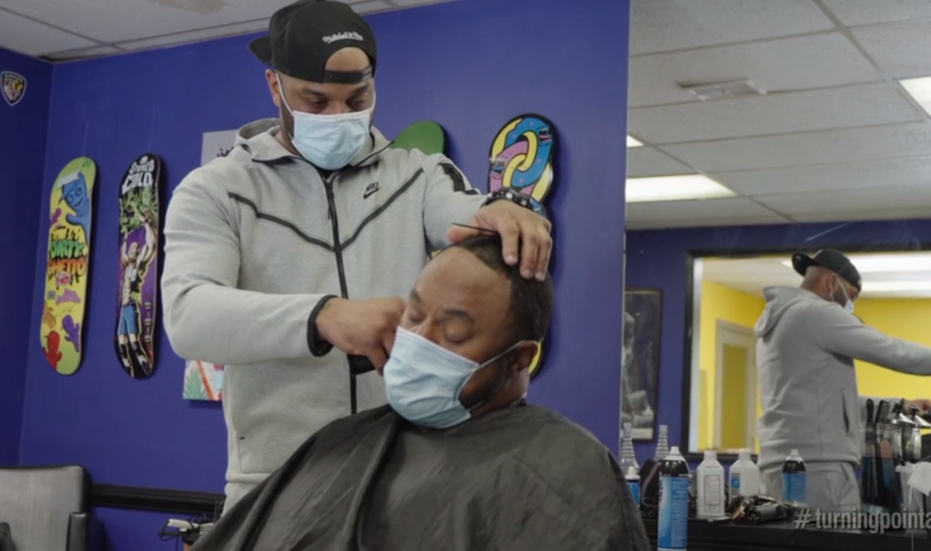 Harry is a barber in Roanoke, Virginia now after spending 10 years in a Virginia prison for a cannabis felony. 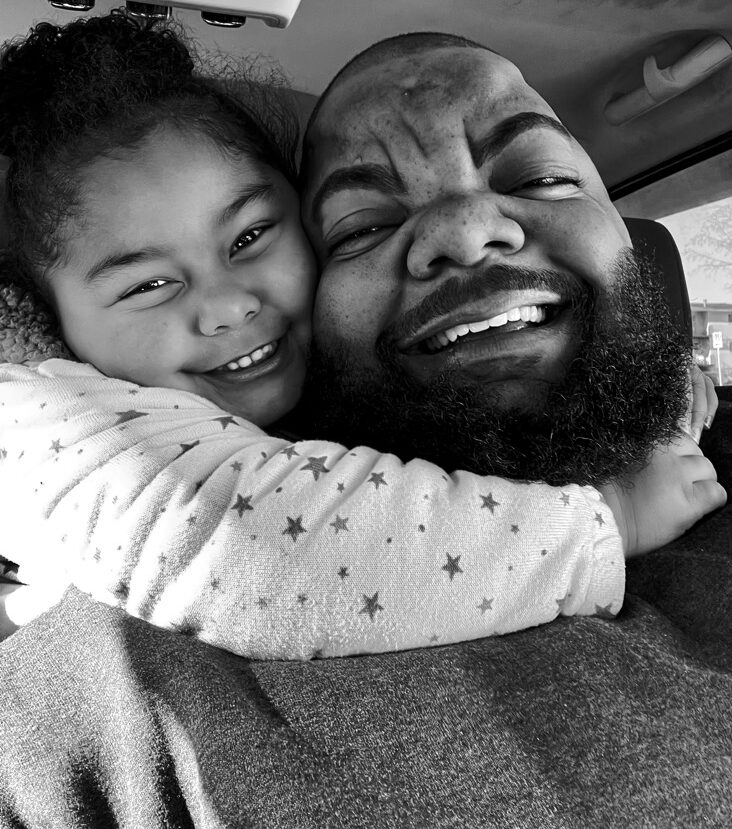 Oscar has lived in the U.S. since he was 3 years old after his family legally immigrated from the Dominican Republic so he could receive medical care to treat complications from Noonan’s Syndrome. Now at age 27, migraines are just one of the symptoms Oscar finds relief when he consumes cannabis. But, because of a marijuana possession charge, he is facing automatic deportation to a country that is not his home if he renews his federal immigration papers regardless that he has paid all state penalties for his charges. Federal legislation like the MORE Act will help individuals like Oscar live without the fear of deportation and leaving his family in the U.S.

Thomas, now age 29, from Plano, Texas, is a 3 stripe brown belt in Jiu-Jitsu martial arts recently winning his debut pro match. At 18, he was on track to go to the Junior Olympics for wrestling when he discovered he had a heart condition that ended his dream. At age 22, he was successfully employed in the cannabis industry in Colorado, but a trip home to Texas, would result in a 5 year felony prison sentence for possession of 1/8 oz of cannabis that would have been a misdemeanor if it wasn’t infused in a pint of oil. Thomas has served his time and is off of parole now, but he is repeatedly denied employment when a background check is done. Ironically, now he is also barred from being employed in the cannabis industry because of his record. 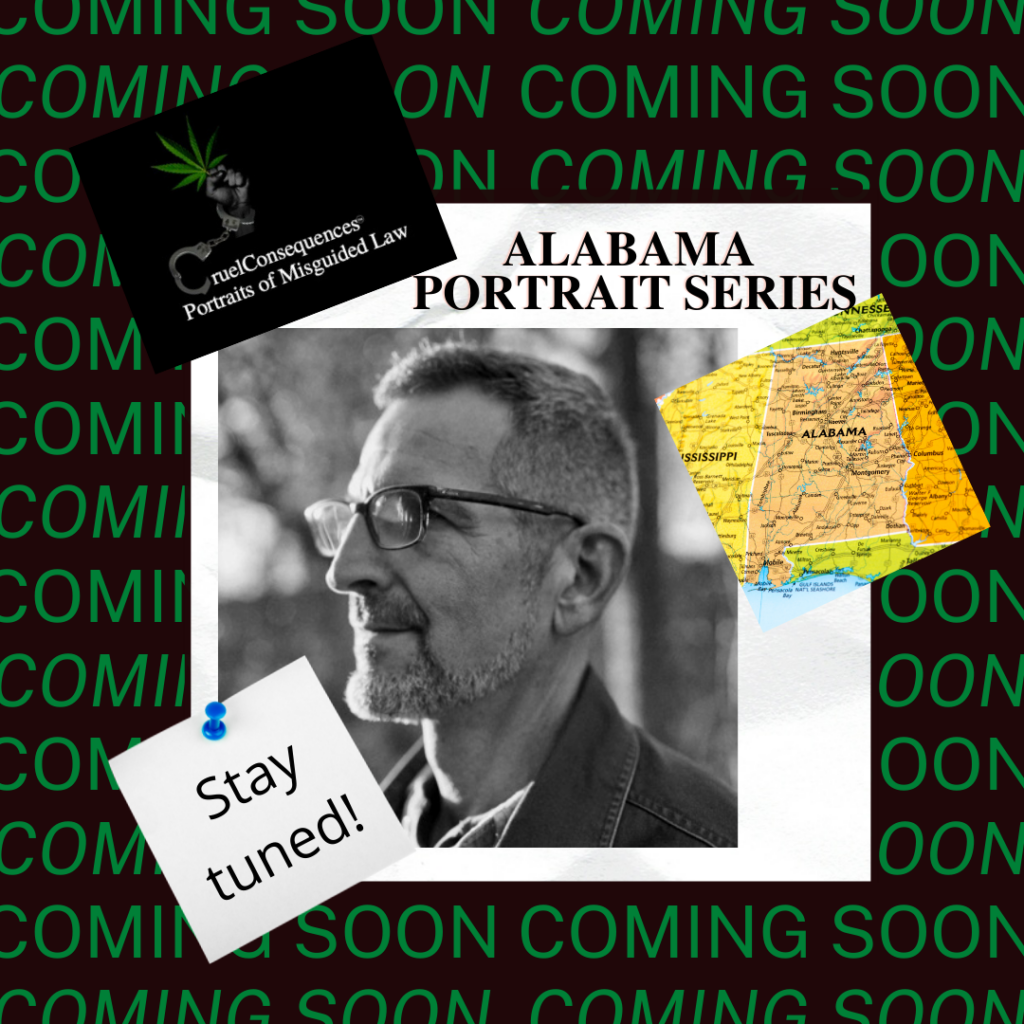 Alabama governor, Kay Ivey, just signed Senate Bill 46 recognizing the medical benefits of cannabis, but even when the program gets up and running, estimates say Fall of 2022, the reform won’t stop the thousands of arrests each year for cannabis in Alabama. Millions of people consume marijuana for medicinal benefits in the U.S. and the majority of states have some form of cannabis law reform, but in Alabama, a cannabis arrest could still mean incarceration with lifetime collateral consequences like denial of employment, housing, or child custody. Dr. Jeff Khleif, a pharmacist, has experienced all of these from his arrest and will be the first in a series we are sharing soon in collaboration with Alabama NORML. Stay tuned! 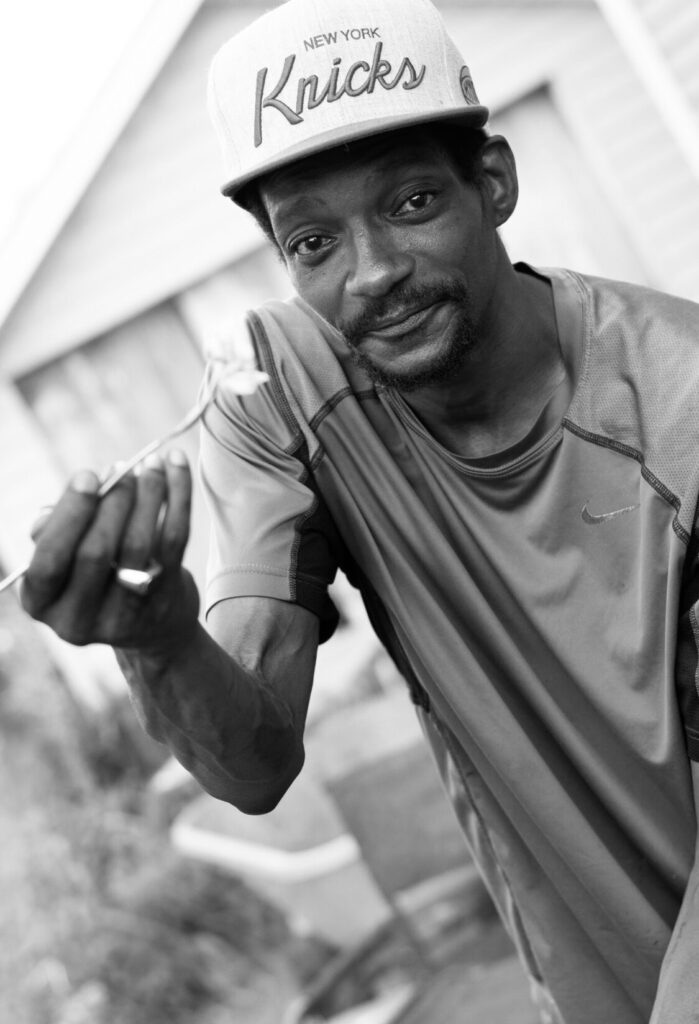 Christopher did not have a marijuana charge. But when he was on probation for a nonviolent domestic dispute, a positive result on a mandatory drug test meant his PO turned the case into a drug case. Christopher’s court date was delayed because of the pandemic which meant his probation was extended. The passage of decriminalization in Virginia coincided with his new court date which may have affected the judge’s decision to only give him 5 days in jail. Christopher knows it could have gone down differently if decriminalization were not in place. 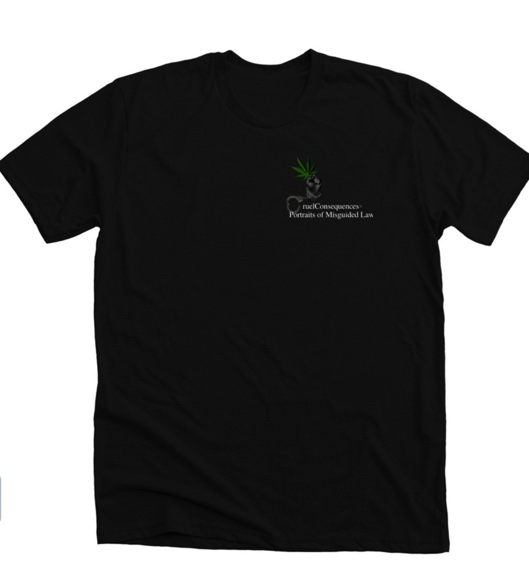 Support our 501c3 Nonprofit by ordering a Cruel Consequences tshirt or other merchandise. 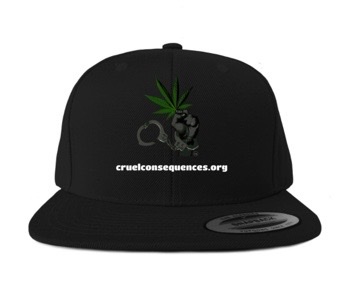 Michael, a  Navy Veteran, was medically retired from the military due to his kidney disease. His new kidney triggered chronic pain which led him to seek medical cannabis from a dispensary out of state so he could avoid potential contaminants that could further harm him in cannabis from the illicit market. Michael was arrested bringing the cannabis back into the state of Virginia.

Edward is continually fighting for custody of his children and Child Protective Services will not recognize his Virginia Medical Cannabis Registered Patient Card as protection from policies against cannabis use.

Long after court requirements are satisfied from a marijuana charge, many Americans are denied basic rights like employment, voting, housing, property, child custody, and college loans that keep them from Life, Liberty, and the Pursuit of Happiness

Tyrone, a Navy Veteran, treated for PTSD by the Veteran’s Administration with dozens of medications with negative side effects, knew cannabis would help him in a more healthful way. He wanted to avoid potential contaminants in cannabis from the illicit market, so he chose to grow his own cannabis in his garden. Even though it was for personal use, growing cannabis is treated as felony manufacturing. Long after Tyrone paid his debts for his charge, he and his family have been denied both private and public housing.

Harry went to prison in 2008 for manufacturing and distribution charges with the mandatory minimums and when he was released 10 years later, nine states had legalized the adult-use of cannabis making millions of dollars doing the same thing for which he was put behind bars.

"I was sitting there in handcuffs on the side of the road while my father's medicine lay on the hood of the car."

Brooke wanted to help ease his father’s pain from bladder cancer but was arrested when law enforcement pulled him over for a traffic infraction and searched his car. 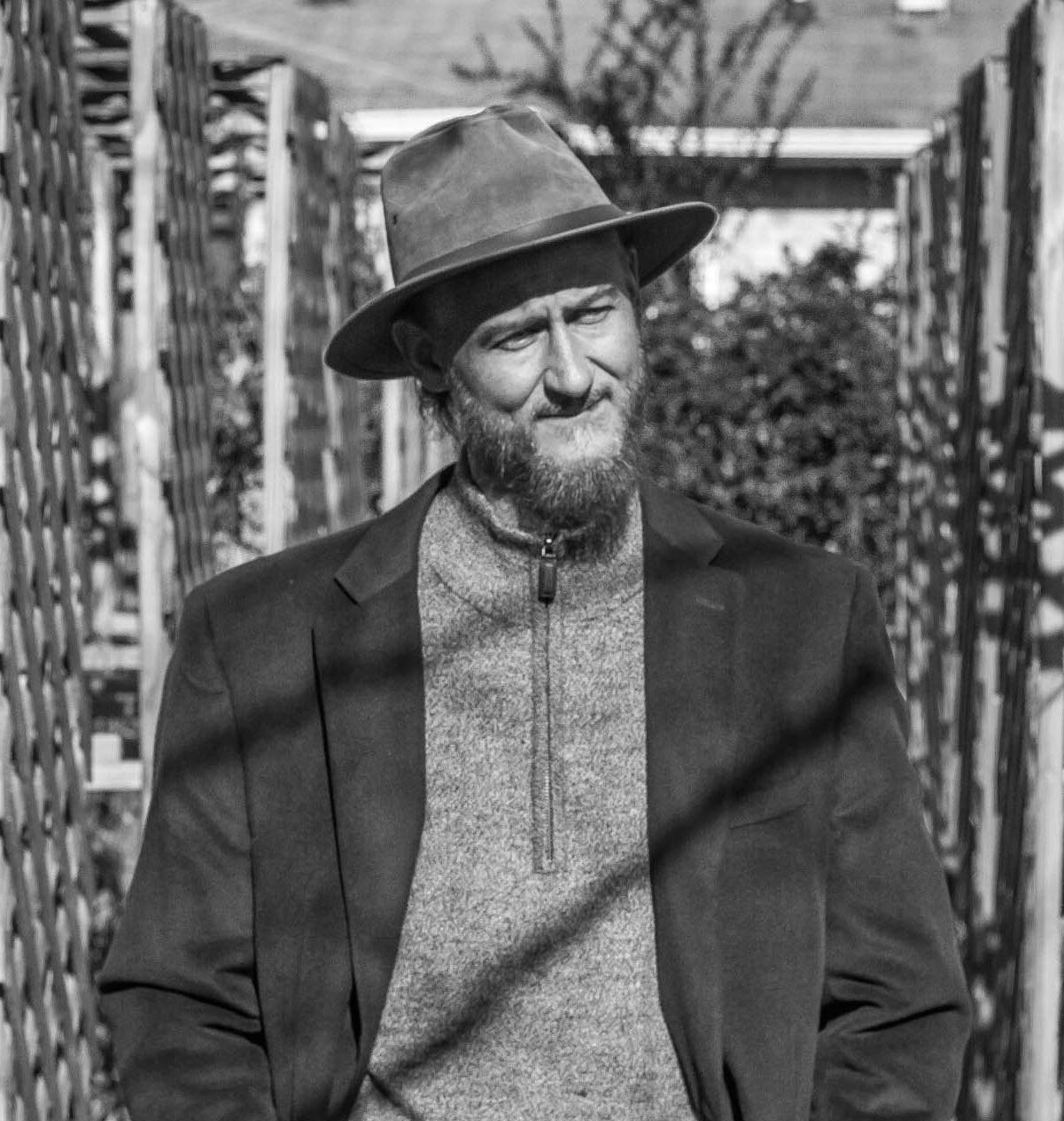 Joe suffered for years from the collateral consequences of a possession charge at age 19. He struggled to get employment because of propaganda and stigma influenced policies preventing applicants who have a drug charge on their record. Joe passed away at age 43 from cancer. His state of Virginia has passed medical cannabis, decriminalization legislation, and legalization since his passing that he never got to see.

We encourage communities to question assumptions and have open conversations

to replace the negative stereotyped images of marijuana criminalization

We want communities to see the human cost of cannabis prohibition through the testimony of those affected by the
War on Drugs. 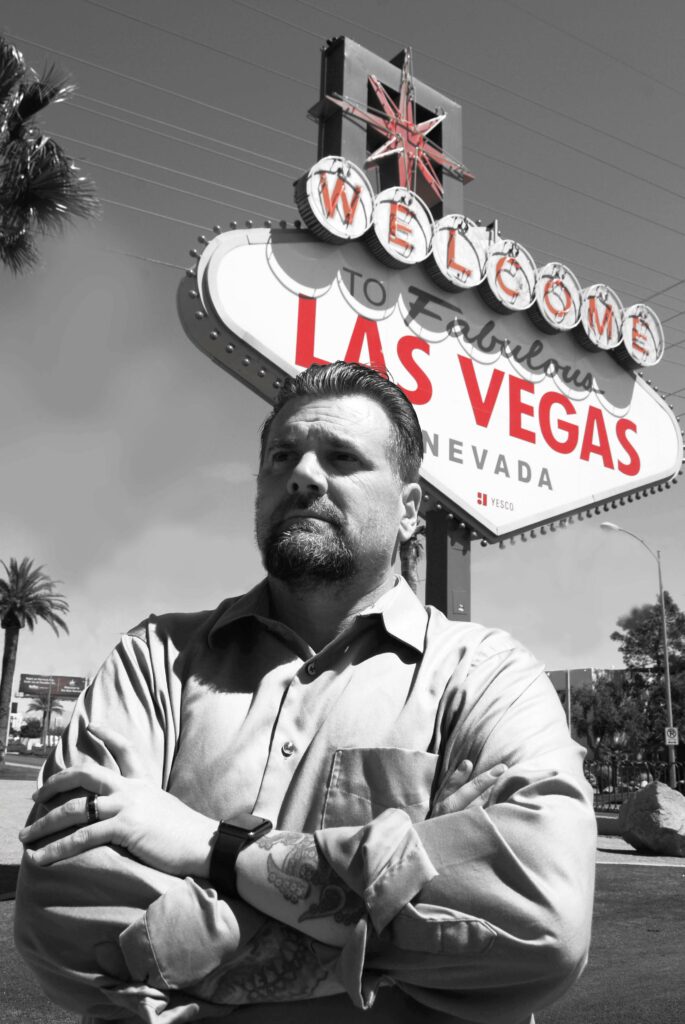 Jeff moved his family to Nevada so he could get a medical cannabis patient card and treat his PTSD from his many combat missions in the NAVY. Nevada had also passed legal adult-use of cannabis at this time. However, none of this cannabis law reform or him passing 3 road side sobriety tests protected Jeff from draconian laws making any Nevada driver a criminal if they have ANY cannabis detected in their blood. These ‘Per Se’ laws are not scientifically based.

Joe and his wife Ryanna were caught in a difficult place. Nevada’s medical cannabis program allowed Ryanna to treat her Ehler’s Danlos with cannabis, but the couple lives on the Walker River Pauite Reservation where the tribe kept cannabis illegal despite the law changes. The tribe said Ryanna could continue growing her cannabis plants in her home on the reservation as a patient as long as she was not officially a part of her husband’s tribe. Until…someone tried to say the plants were Joe’s, not Ryanna’s…

Dolores, a registered nurse, was growing cannabis to treat her ill husband. The couple’s farm was raided and the couple in their 60’s spent a few weeks in jail, but the incident took a toll on Dolores’ husband who passed away shortly after. Dolores faced the charges by herself while grieving her loss.

Jessica wanted to help fellow medical cannabis patients who preferred not to smoke it convert the only form of cannabis sold in Delaware dispensaries, Flower, into edible forms. She always checked for the patient to have ID, but an undercover cop convinced her the card was in the mail and she was arrested.

Trenice admits she was addicted to Opioids and even though she had access to cannabis, she did not consume it. Friends concerned for her health, convinced her to use cannabis to help her break her addiction to Opioids. To her surprise, cannabis allowed her to begin a healthy journey beyond dropping the opioids.

Lucas was denied employment opportunities for years after his charge, but he has hope that Illinois’ new legislation will allow his to be pardoned by the Governor. 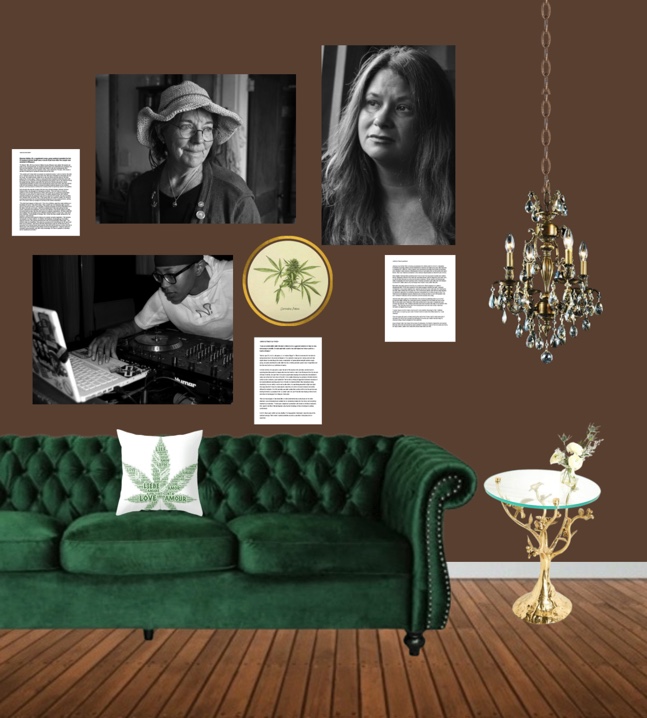 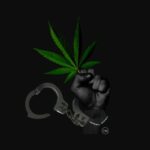 Design your own Cruel Consequences Exhibit wall display your dispensary customers will appreciate.

Start your order…click the leaf